Big five is commonly used in the tourism industry not just in Uganda but all over the world by tour operators. The “Big Five” was a term that was first used by the big game hunters and later picked up by tour operators as a way of marketing these animals and making them attractive to tourists. They particularly named five of these animals big Five because of their ferociousness when cornered; these are the Lions, Leopard, Elephants, Buffalo’s, and finally the Rhinos.

Buffaloes in Murchison falls
Uganda is one of the few countries in Africa where you can find all the big fives; they are found in almost all the national parks in the country. In Murchison Falls National Park is where you will find four of the big fives. This is because Rhinos became extinct in the country so they were habituated and protected after being brought in from South Africa. They are found at Ziwa Rhino Sanctuary. And one can see all the big Five when one visits Murchison falls with Ziwa Rhino Sanctuary included in their itinerary

Also known as African Elephants, these are the largest mammals that have ever been known to man in the whole world; they can grow up to 14 feet tall and 30 feet wide. Elephants live in forest woodlands and in the savanna areas. They are however very social animals and they live in family groups of up to 100 members.

These are one of the most peaceful animals only if left alone and basically not cornered. Mother Elephants are very attentive and protective animals of their little ones. Elephants are known vegetarians. They feed on grass, fruits, leaves, twigs, and bark and seed pods. An adult consumes up to 375 lbs of vegetation and 30-50 gallons of water on a daily basis. Most of the elephants are found in Queen Elizabeth National Park and Murchison Falls National Park and an estimate of about 500 of them are found in Kibale forest National Park. The kinds that are found in Kibale Forest are called Forest elephants because of their hairy bodies due to tropical climate all year round. 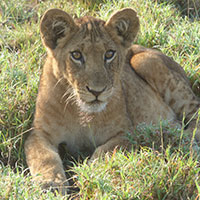 The king of the Savanna also known as the African Lion is one of the most sought out animals by tourist. It is known as the King of Savanna. Lions are up on the food chain, they are the predators and they are quite excellent hunters. You may be one of the lucky few to get it hunting. They can grow up to 14 years, however, they are said to have a 30 % decrease in number in the last two decades in the whole of Africa. 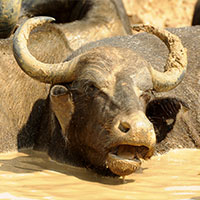 Also known as the Water Buffalos are two types in Uganda; we have both the Large Savanna buffalos and the Small Forest Buffalos. The Forest buffalos are the smaller. Buffalos are one of the most dangerous animals in Africa that is why they made the list of the big five. An adult buffalo is as large as 4 – 6 feet tall and weighs up to 700 kgs not even a Lion would not dare attempt to hunt one alone, unless it has two more of its kind to help. Buffalos live in open grasslands and they live in large herds of numbers close to a thousand.

Since the males fight to take dominance in a herds, the males that have lost the fight from another herd. That is why you will find a herd that has a males, females and calves while, in a different herd you might find only males. Buffalos drink a lot of water, which is why you will often see them along water banks or wallowing in mad during a hot day just to cool their bodies. Buffalos are very protective of their calves, they will mob a predator targeting the calf when the calf calls for help. The Swahili word for Buffalo is Mbogo 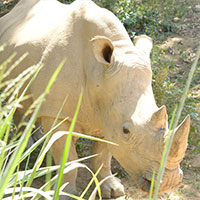 There are two types of Rhinos, the Black Rhinos and the Southern white Rhinos. There is not much of a difference between the two except that the shape of their lips is different i.e. the Black Rhinos have a pointed lip that they use to pick fruit and twigs while as white rhinos have flat lips that they use to graze on grass. Here in Uganda, we only have the Southern white Rhinos that were imported from South Africa and are currently being protected at Ziwa Rhino Sanctuary because Rhinos went extinct in Uganda, and it is thus a great fear to send the few Uganda has, into the wild before they reproduce and greatly increase in number. Ziwa Rhino Sanctuary is located along the Kampala Masindi route to Murchison Falls National park.

Compared to the black Rhinos, the White Rhinos are more social and live in groups. Only second to Elephants, Rhinos are one of the largest mammals in the world where an adult and fully grown Rhino can weigh up to 6000 lbs. Rhinos are known for being short-sighted and also very short-tempered. However, in case you do not tamper with it, it is peaceful. Man is the only natural predator of Rhinos and that is why they became extinct in Uganda. They were hunted down all the time for their horns. For that reason they are known as endangered species and are protected by Ziwa Rhino sanctuary. 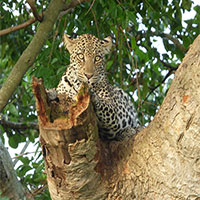 You may not ever find more than one Leopard together because they are very solitary and shy. Unlike other cats, Leopards have the ability to live in a wider range of habitat. They climb trees, they can also swim very well compared to lions. An adult male weighs up to 200 lbs and can jump up to 10 feet straight up. Leopards prefer thick bush and riverine, however, when they have a kill, they prefer to store it up in the trees to prevent lions or hyenas from coming near it.

OUR BEST ONE DAY TOURS